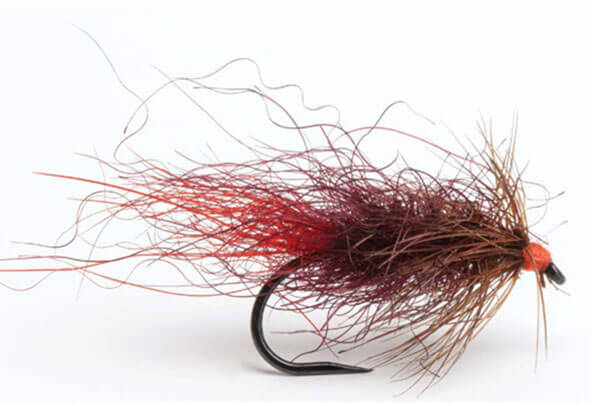 This fly looks here like a bit of a nebulous blob. But then again, it’s a favourite fly of Mark Weigall, guest speaker at our September meeting, and Mark has a well-deserved reputation as a highly skilled fly fisher and guide, so it must good.

Jim Jackman, one of the guides at Millbrook Lakes, assures me that this fly has indeed proven to be a deadly pattern.

The fly shown above is just one of a number of carrot fly variations. We had previously described a basic carrot fly in our October 2017 issue, and Jim tells us that by just changing the colour of the body this very versatile pattern can be used to represent a number of different insects.

Tied in green or olive fur it’s a very effective damsel fly nymph, tied a bit lar ger in black it’s a good evening mudeye pattern, whilst tied in small sizes it catches fish in evening midge hatches. In the colours shown here it is a deadly fly in dun hatches, as apparently claret is a particularly attractive colour to trout when our Australian mayflies are hatching, and the Claret Carrot shown above has proven consistently successful in dun hatches in both Tassie and Victoria.

The basic Carrot Fly was originally introduced to Australia by John Horsey, a UK-based competition fly fisher who is highly regarded in the UK and a regular contributor to UK fly fishing magazines. The picture above is of the pattern used by Mark, who obtains his supply of Claret Carrots from Andrew Summers at Mayfly Tackle. It is part of their Fulling Mill Christopher Bassano Australian Fly Range.

The Fulling Mill site tells this: “The original John Horsey pat tern was orange in colour, but lots of other colour variations have been used. It was originally designed as a ‘sighter’ fly when using a three fly rig but has proven to be a fabulous fish catcher on its own. Its floatability makes it perfect for ‘pulling’ along the surface, but it is eaten static just as often. Large sizes are the norm as the bulk adds to its effectiveness. When mayflies abound, it is at its best and even more so when there is ma good wave.”

Jim suggests another way this fly can be used. Add floatant to the Carrot and use it as an indicator with a nymph suspended a metre and a half underneath. Then let it drift in the wind but every so often give it a long hard pull to draw the Carrot vigorously across the water surface. The wake created will attract the attention of any nearby trout as this is a deadly trigger. The act of drawing the fly across the surface will also cause the nymph to rise up as if it’s about to emerge, and this is another very powerful trigger highly likely to draw a strike.

Jim points out that this fly, as shown, is hardly a close imitation of an actual insect.

Rather, it is a general representation of something that might be alive and edible in the water. It’s about the same size and shape, so has the right profile and proportion of lots of bugs that trout eat and hence they are very likely to see it as food. Rough, buggy-looking flies catch fish.

Materials for the Claret Carrot:

Tail: A tuft of red seal’s fur, though Jim suggests Antron can also be used.

Hackle: Brown hen, though if the fly is to be fished as a dry fly or used as an indicator a brown cock hackle can be used.