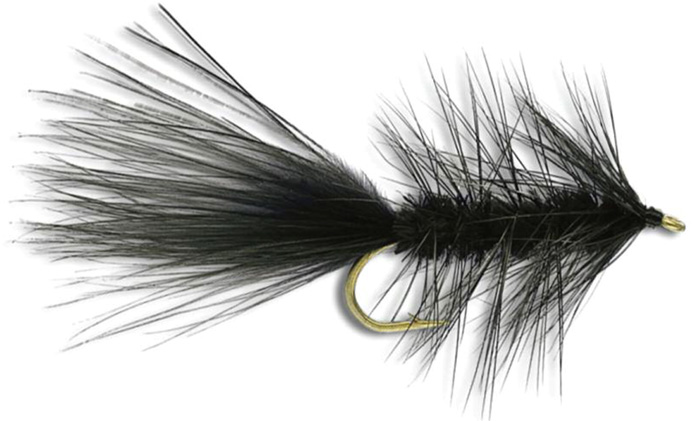 This photo taken from The Fly Shop site, Redding, California. (Used with permission.)

Well, the stream fishing is now over and done with, so many of us will be turning our attention to the lakes. And what better fly to tie for our still waters that this one. One of the popular American fly-fishing magazines describes this fly as ‘simply the most famous fly of all time’.

Jim Blakeslee mentions it in his brief report on his success fishing the Hopkins River a few weeks ago. I know that Jim uses this fly a lot, even when fishing the Highland Lakes of Tasmania. I was there with him a few years ago and we were fishing the south-west corner of Little Pine. Nothing was moving or rising (as is usually the case for me). Jim suggested that in these circumstances a Woolly Bugger fished along the edges had often produced fish for him. To demonstrate he tied on one of his WBs, made a couple of casts along the edge, and sure enough, as so often happens with Jim, the line tightened, and he was connected to a handsome 2 lb brown.

According to the scribes, this fly is a popular and widely used pattern for both freshwater and saltwater game fish. It is tied in a variety of styles and colours to imitate a wide range of game fish prey. “It is so effective it should be banned from some watersheds.” Its effectiveness is due to its resemblance to so many edible creatures in the water, and its tail undulating behind the body is just too much for most fish to resist. It just looks like a meal!

The origins of the Woolly Bugger can be traced back to the Old English pattern the Woolly Worm, which is also a very effective pattern. Whatever the origins, the popularity of this pattern cannot be denied. The popularity can be partly attributed to its versatility. It can be tied in almost every colour imaginable. The most popular colours are black, brown and olive, with purple and white right behind. But almost every colour has been tried, and different colour combinations are often used on the same fly.

Marabou feathers – black, olive and brown being the most popular colours, though any colour can be used. A few strands of Flashabou or Crystal Flash are often added to give some bling and extra sparkle. (Note: for the tail you need to find marabou with long supple fibres, and tear these fibres off the stiff central stem of the marabou feather to use for the tail.)

Adding a bead - tungsten or brass or even coloured plastic is a common practice to make the fly sink in deeper water as well as add some attraction. Beads can be black or silver or brass. A bright red bead adds to the overall attraction of the fly. Beads need to be large enough to match the size of the fly, so something about 0.45 mm or even larger needs to be used, depending on hook size.

Chenille or yarn - usually the same colour as the marabou tail, but combinations are popular, e.g. an olive body with black marabou tail.

Cock hackle tied as a palmer hackle along the body. Cheap hackle feathers can be used as these are often softer and more pliant than top quality cock hackles. The Whiting company sell packs of hackle feathers called Bugger Packs and these are especially designed for tying Woolly Buggers. These feathers are excellent, and most tackle shops sell them.