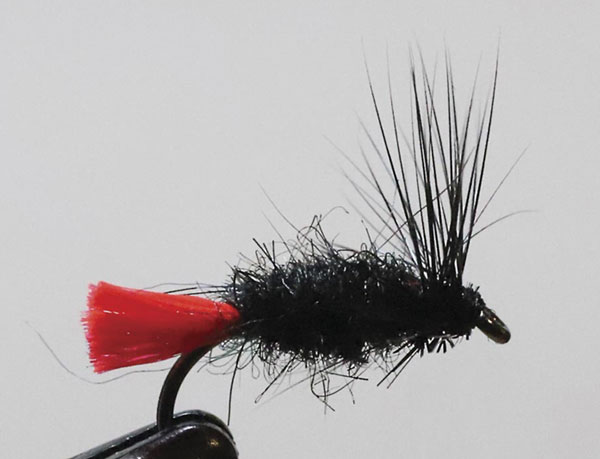 I had always regarded the Zulu as a small wet fly, and never bothered with it much anyway. But I had a discussion recently with Dick Clark, a VFFA member who spends a lot of time fishing Tassie’s highland lakes - and very successfully too. Dick is quite an authority on Lake Botsford in particular and wrote an article on fishing this popular lake for our September 2015 newsletter.

Dick told me in our recent discussion that one of his favourite and most effective flies on Botsford and other highland lakes is a dry Zulu. I then discovered that Craig Coltman, who prepares the fly tying material for Philip Weigall’s FlyStream digital magazine, wrote about this particular pattern in the FlyStream Summer 17/18 issue. Craig also demonstrated the tying of this fly on a YouTube Video – which is well- worth a look: https://vimeo.com/253200387

In describing the fly Craig says this: “Christopher Bassano first showed me this fly about eight years ago. Even though it is a very simple and seemingly unremarkable fly, the Zulu Tag has become one of my favourites. I use it extensively from spring, right through to the end of the season. The Zulu Tag exhibits all the qualities I am looking for in a fly; that is, it’s easy to tie, is robust, it requires minimal maintenance when fishing, and it has that impressionistic aura of life about it.”

Chris Bassano tells us that this fly floats so well that it works superbly with a nymph hanging under it. The colour combination of black and red has stood the test of time. It is another great fly when used on its own in smaller sizes when sight fishing. In a team, it can be fished anywhere on the leader and although it floats well when “pulled”, it fishes best static. “I am usually using this fly when I catch my first trout on the dry fly each season. It is just as effective when used on lakes and rivers although the smaller size is recommended for the river. I like black seals fur for the body because it floats very well and the fly requires a body material that floats well. Baby seals fur ties in very well and is neat but adult seals fur seems to float better so I prefer to use it and am happy with a scruffy body. This fly accounts for a ridiculous number of fish in all circumstances.”

So let’s tie a Zulu Tag:

Materials for the Zulu Tag:

Body: Black seals fur. (This is the best material to use, but if you don’t have seals fur then black possum or black hare’s ear fur or some coarse black synthetic dubbing could be used.)