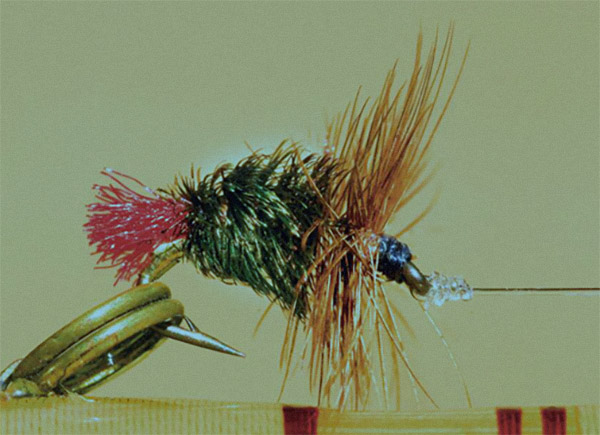 (This photo was provided by Mike Stevens and was the photo on the front cover of Glenn Eggleton’s biography of Noel Jetson.)

This year Fly Lines will be returning to some of the classic flies fished by members. Thus, John Philbrick’s nymph was featured in the February issue.

There is no better example of this than the Red Tag, originally tied as a grayling fly. It has been adopted by Australian fly fishers like no other. And there is no better example of the Red Tag than the one tied by the late Noel Jetson. Noel’s version seems to differ from other Red Tags, particularly those tied commercially, for two reasons - the gold tinsel butt and the way Noel used peacock herl.

Thanks to the kindness of Glenn Eggleton, the author of Noel Jetson - Life and Flies, we are re-publishing Glenn’s detailed description of Noel’s Red Tag and how to tie it.

Noel’s favored hook was the Mustad 9578A in size 14. This is most closely matched today by Tiemco 102Y size 17. The Tiemco size 17 is ever so slightly larger, has a Limerick bend but is not slightly reversed. Noel believed that the off-setting of the hook point from the line of the shank on the Mustad 9578A offered a distinct advantage in setting the hook. Noel also tied his Red Tags in size 12 (Tiemco size 15) and sometimes in size 16 (Tiemco size 19). When he tied Red Tags in larger sizes (e.g. size 10) he usually employed a palmered hackle by way of variation.

(This Fly of the Month feature is from Noel Jetson - Life and Flies, author Glenn Eggleton, published by Stevens Publishing Tasmania.)

The March 21st,2019 Meeting with Richard Kos
The May Meeting – Our Annual Auction – May 16th