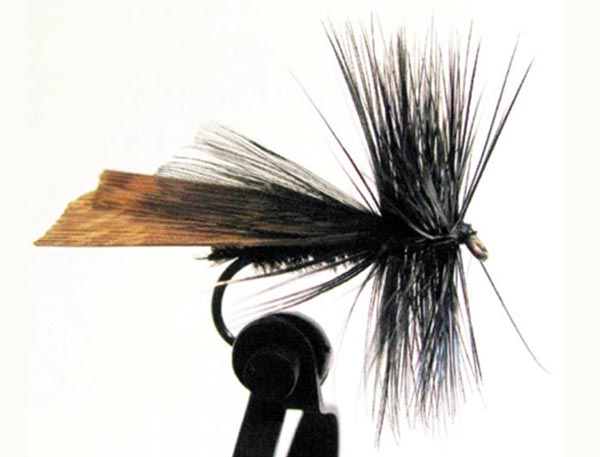 It is so sad to report that Julian died in early May. He joined the VFFA in 2007 and became a very popular and highly respected member. He had many friends in the Association who regarded him with a great deal of affection. Jim Allen, who knew him better than most and was a close friend for many years, has written the moving tribute which is included earlier in this issue.

Julian became well known among Australian fly fishers for the fly he created to represent the Bogong Moth, a large insect common around the stillwaters that he fished in north-east Victoria. The fly became known as the Dunny Brush, but despite the title it is a highly effective fly.

“The Dunny Brush is a famous fly among my circle of fishing friends and without doubt the deadliest evening fly I have ever encountered. First invented by ski lodge entrepreneur Julian Brown, it was tied as a Bogong Moth pattern for fishing Rocky Valley Dam near Falls Creek in Victoria. ...

The Bogong Moth sometimes reaches plague proportions in the high country of Victoria and southern New South Wales, and trout find them delectable. As the last light of day recedes to the west, and in the final afterglow, the Dunny Brush reigns supreme. On many a warm evening on the Great Lake in Tasmania, when cast from a boat in the calm, this fly has out-fished all others including my beloved Red Tag!

It can even be slowly figure-eighted across the oily surface to add life and induce a take. On big rivers, also at last light, it can be skated across and down or fished on slowmoving pools...

So how was it given that intriguing name? Here is Julian’s explanation:

During my second year in Falls Creek ski resort I obtained permission to conduct a small Pharmacy, as there were no drugs or equipment there to treat injuries. One day two ladies came in, one of whom was Shirley Nicholas, the wife of George Nicholas who started the Aspro Company. I got to know her quite well and later on she sent her son Michael up to Falls Creek and asked me to look after him. Michael, then just 18 and driving a brand-new Land Rover, arrived soon after.

He was a fly fisher, so one day I went with him to Pretty Valley Stream to see this fly fishing in action. It was a marvellous spectacle. Michael and I remained good friends and he often came to Falls Creek in both the summer and the winter.

One day in Coles at Albury I saw fly rods for sale at 30 shillings, so I bought one. On Michael's next visit I showed it to him and he, after waving it about, pronounced it a “lovely stick”.

At this stage I had a pharmacy in Sydney and only came to Falls Creek for July, August and September. I decided to sell the Sydney pharmacy and move to Falls Creek fulltime. The pharmacy was sold, and my wife and I moved to Falls Creek. Soon after this I went to Mount Beauty where I purchased a few flies and an Aircell fly line that I put on a 10 bob bakelite reel. With this rig I went off each day to Rocky Valley Dam. But no matter how hard I tried I just couldn’t cast this rig, so just sat and watched the lake. In retrospect this apprenticeship did me no harm, as I learned to observe and read the water.

I had come to know John Brookes, who was then a skier and I had seen some of the fish he had caught at Eucumbene which were so much bigger than our trout. He was staying at Falls Creek for a few days, so I ask him if I might tag along to watch him fish during the afternoon. He readily agreed so I met him at Pretty Valley Dam. He was very generous and gave me my first lessons in fly casting. I was ecstatic and soon after hooked a trout of almost 2 lb. I didn’t know quite what to do then, so to keep tension on the fish I ran backwards up the bank.

Another gentleman I had got to know there was a catholic priest called Father Foster. He was a right character. Father Foster was a frequent visitor and I fished with him in his boat at Rocky Valley. During the day we trolled, but on evening it was fly fishing during the evening rise. One evening after we’d fished together, he said he would show me how flies were tied. He opened his fly-tying box and showed me the tying of four different patterns.

The wall of Rocky Valley Dam was covered with large basalt rock. Bogong Moths had colonized this expanse of rock and flew all over the place on dusk. I had seen trout leaping from the water and taking them on the wing. So, I asked Father Foster if I could have a go at this fly tying as I reckoned I could tie something to look like a Bogong Moth.

I tied up a horrible monster of an apology for a fly and next evening caught two trout with it. Soon after, on the good Father’s advice, I went to J. M. Gillies in West Melbourne where I purchased a proper fly reel and a Veniard fly tying kit. With this kit I refined my pattern. It was a huge success and I consistently caught four or five trout during the evening rise. As flies go it is huge, as is the Bogong Moth.

Mike Nicholas came up a few weeks later and I told him about my evening catches.

“What on?” he asked incredulously. “Well,” I said, “I’ve been tying this fly that imitates a Bogong Moth.”

“Give us a look at it!” he exclaimed, and when I showed it to him, he nearly exploded.

“Shivers!” he bellowed, “That’s not a fly, that’s a flipping dunny brush”. (Or words, rather more strident and colourful, to that effect.)

So that’s how my fly got its name.

Father Foster used it too. One day we went trolling. He caught seven and I caught five. Later in the evening we tied on a Dunny Brush each and he caught another three in quick succession, making ten in all. “Well,” he cried, “that’s my bag limit.” (As it was at the time.) “That’s where a gentleman stops. But I’m no gentleman,” he shouted, as he waved his rod and caught another one.

My theory is that the Dunny Brush has much the same displacement and outline as the moth it replicates, and that’s why it works.”