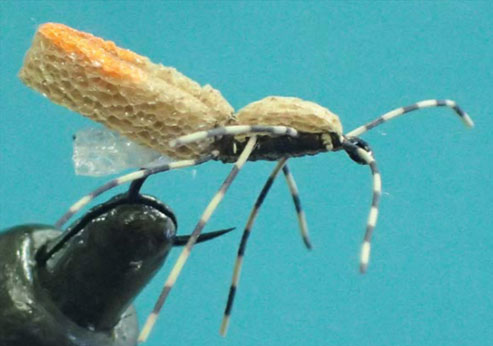 Ed, who lives in Cape Town, South Africa, is a well-known and highly respected fly fisher in South Africa. He is also a keen reader of our monthly newsletter and has provided us with a few Fly of the Month patterns over recent years.

Here are his notes on this pattern.

For many ‘Twig Water’ anglers in South Africa an imitation of the Wolf Spider, which is common in our streams, is a favoured dry fly.

There is a chapter on the evolution of the Wolf Spider imitations in the book South African Fishing Flies, a copy of which Ed very kindly donated to the VFFA library.

These are complex ties and pheasant tail legs are not durable.

I wanted a simpler foam pattern with rubber legs.

Now trout locate their prey by contrast and movement, and Wolf Spiders have more movement than any other insect that is a potential food source because they can run on the water surface.

There is a second reason, founded in trout biology, which explains why this has become a favourite terrestrial.

Gary LaFontaine’s book, The Dry Fly – New Angles, is full of wisdom based on his scuba and radio tagging studies of trout behaviour.

He makes the point that in fast water, trout are more likely to rise to a wide fly than a narrow one such as a traditional Catskill mayfly imitation:

“In rough water it isn’t merely size that controls the trout’s acceptance or refusal. A fish here wants a “wide” fly. The lateral dimensions of the body, the flared hair of a down- wing, or even the spread of a palmered hackle along the hook shank of a flush-floating pattern, attracts this fish better than a normal upwing fly with a simple, elongated body.” (Page 197)

“A wide fly is, if nothing else, worth the risk of rising. For a trout, curiosity about an uneaten item is reinforced by the value of that helpless, meaty chunk of food.” (Page 255)

This is a wide fly but it is hardly an original concept – Modern Terrestrials by Rick Takahashi and Jerry Hubka (Stackpole, 2014) contains 26 arachnid imitations - mostly tied with foam rubber on #10 – 12 hooks.

My favourite foam rubber, by far, is Larva Lace. Its greatest advantage is that it is softer and more elastic than other brands, and it also has an attractive sheen.

For the egg sac, which is often a striking characteristic of Wolf Spiders, I prefer ethafoam packing material, which LaFontaine chooses for his Airhead caddis pattern because it contains air bubbles which disperse light.

The key, for me, in designing this pattern was turning the foam rubber strip on its side to form an oval abdomen rather than folding it double with one layer on top of the other. 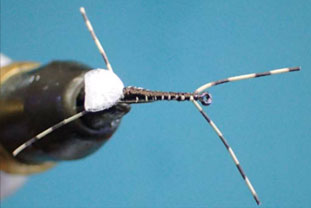 (Stage 1 of the author’s foam rubber Wolf Spider imitation:)
To make the fly more visible I coated the top of the abdomen with orange fabric paint and then covered it with a thin layer of UV light-cured resin.

Another alternative would be Deer Creek resin in red. 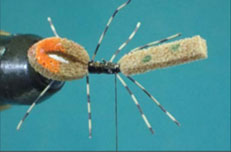 (Stage 2 of the author’s Wolf Spider imitation.)
If this sort of fly is tied on a light wire hook, it tends to land on its side.

The trout in the streams near Cape Town probably average 10 inches and this fly was a bit big for them, so I changed to the Larva Lace option.