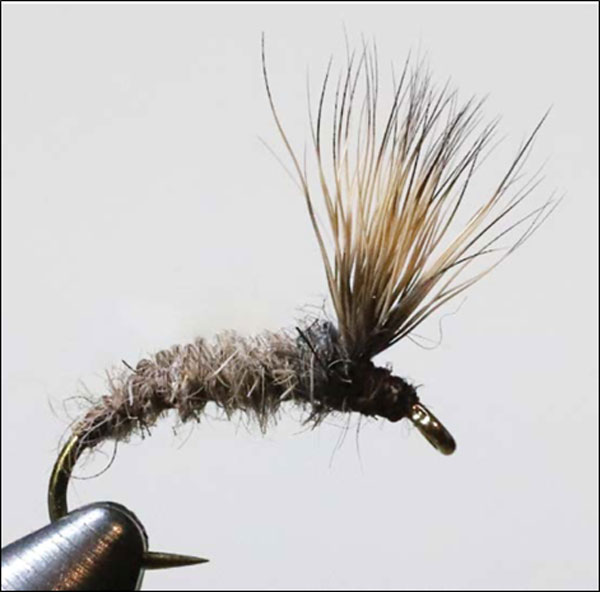 This is a great fly, and is relatively easy to tie. But first, two acknowledgements. Bob Wyatt has been a very significant contributor to fly fishing literature in recent years. He has written countless articles in fly fishing magazines, has authored a superb book (What Trout Want – the Educated Trout and other myths), and produced a two- volume set of DVDs entitled Flies That Catch Fish”. And I've undoubtedly omitted other contributions he has made. His Deer Hair Emerger is demonstrated in Volume One of his DVD set. Thank you Bob for this great fly.

My other acknowledgement? For years Gordon Brooks wrote the fly tying notes in the South Australian Fly Fishing Association’s monthly newsletter. His notes were superb, and I frequently printed off his monthly contributions and stored them in my collection of fly tying articles. His notes on this fly, the Deer Hair Emerger, were written in 2014 and I had no difficulty in hunting them out when I was looking for a good fly for this month’s issue. My description of the tying procedure that follows is largely taken from Gordon’s description. Thank you Gordon.

In his book What Trout Want Bob writes about this fly (the ‘DHE’) at some length. "It was originally designed for fishing as a static mayfly emerger on Scottish lochs. It quickly became my go to emerger. In appropriate sizes it works extremely well during the emergent period of any hatch, anywhere, and maybe has an edge on some of the more complicated emerger patterns.

If you have trouble getting it to float properly, this issue can be fixed by a couple of basic fly tying points and a tactical use of floatant. Getting the DHE right is just about proportions. If the wing is too long, for instance, it can overbalanced the keel effect of the sunken abdomen. This fly isn't meant to float like a conventional dry fly, but with the abdomen and even the thorax completely submerged. Getting floatant on the abdomen will definitely capsize it so that it floats on its side on the surface rather than in it.”

Rib: Tag of the tying thread.

Thorax: Spikey fur from the centre of a hare’s mask, darker than the abdomen.