The History of the VFFA

It is now 75 continuous years since the VFFA came into being, originally as The Victorian Trout Fishers’ Association.

In an important respect, however, 2007 is actually the first year of the Association’s second hundred years. A sole surviving membership card form 1906 bears witness to the existence of a Victorian Fly-fishers’ Association in that year.

The card, which belonged to Mr. E. G. Ritchie, lists the Association’s rules and charter, which included the establishment of a trout hatchery. Unfortunately this original body survived only a few years and the hatchery did not eventuate.

There were several attempts to revive the organisation after World War I, but these were unsuccessful until May 3, 1932. The new body involved several of the original VFFA members and adopted the original VFFA rules. However, it was felt that inclusion of the word ‘Trout’ in the Association’s name would assist moves to amend the Fisheries Act to introduce a license for trout fishing.

The proposal was debated at length in the Victorian Parliament and the Bill was eventually passed. At its proclamation, the Association immediately replaced the word ‘Trout’ with the original ‘Fly Fishers’.

Some non-fly fishing clubs such as the Ballarat Angling Club and the Elwood Angling Club, and possibly the casting club Red Tag (as it was originally) pre-date the 1906 VFFA, as does the Victorian Piscatorial Council.

However, the VFFA is the oldest purely fly fishing body in Victoria. Apart form the license issue of 1932; led mainly by Les Vail, the revived VFFA was involved in all the issues germane to the establishment of fly fishing for trout as a recreation in Victoria.

It was particularly active in discussions concerning the then cormorant plague, access, pollution, vandalism reported by landowners and the need of scientific studies in trout production and fisheries management.

It established the first trout hatchery at Narbethong, which was later taken over by the State government and moved to Snobs Creek.

This groundwork was largely carried out from 1932 to 1935. In the early period the Association grew in membership to include many prominent members of Victorian society, including doctors, lawyers, academics, military personnel, newspaper chiefs and artists.

There were many people who played a large part in the revival of the Association and of the development of fly-fishing in Victoria. Several names stand out: Barney Allen, Paul Nunan, Michael Martin and in later times Jack Ritchie. 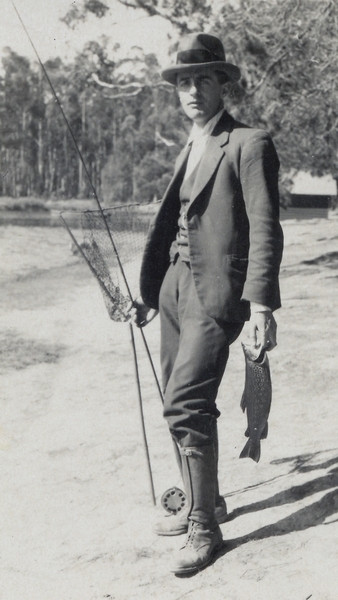 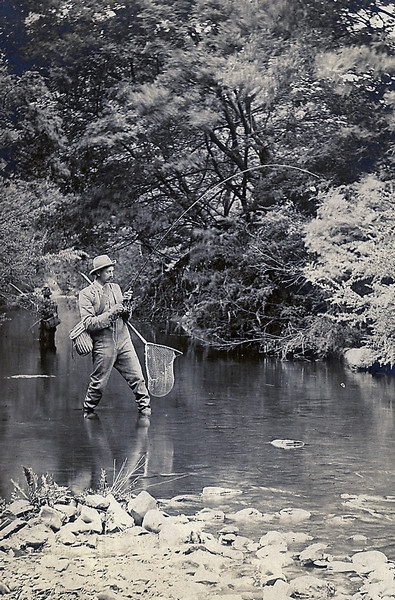 During the dark years of World War II: the offices of President and Secretary were maintained by two men, who ‘kept the home fires burning’. Champion fly caster Theo Brunn filled the role of caretaker President admirably, together with N. Hepworth as secretary.

Winter fly-casting competition was taken very seriously – perhaps more so than today – and the VFFA provided many champions in distance and accuracy events. Casting classes were held and venues included, for a time, Albert Park Lake and Ringwood Lake where water improvements were carried out and experiment in trout habitat and such were conducted. Limited fly fishing was also permitted.

The VFFA and the Red Tag Casting Club co-owned the first casting pool at Yarra Bend Park. In the 1970s it was acquired for the construction of the Eastern Freeway.

Also shared with another fishing organisation was a fishing lodge at Eildon, providing access to the famous Dome Hole, which made fly-fishing there so special. After the dam wall was raised in the mid-1950s and the dome Hole was lost, interest fell away and the share was eventually surrendered. The site was taken over by commercial interests, which had long coveted it for a caravan park.

Discussion still arises within VFFA from time to time between enthusiastic members who pine for an Association fishing lodge or shack, but financial, logistic and administrative problems have prevented such a project materialising.

Apart form the casting competitions and fishing parties camping out in remote locations, fly tying and fly tying classes have been an important aspect of the Association’s activities. Association members originated two of the most successful Australian trout flies. These were the K.Z. Geehi originated by Keith Zwar, often now referred to incorrectly as the Geehi Beetle, and the Brown Nymph of Roy Kirk.

The Association has been blessed with a number of vital personalities – Ted Dawkins, J.M. Gillies, Reg Lyne and Jim Allen to name but a few – who have helped shape the course of fly fishing as we know it today. Some invented flies, others dealt with issues: the early legal problems of license and access, casting competitions, importation of quality fly fishing gear, matters of water quality and stocking of impoundments and streams, the history of trout introduction, and the politics and policy of recreational fishing.

This has involved a lot of time by many members over many years, none more so than by Jack Ritchie who contributed to most of these bodies at one time of other.

The Association has never had a permanent venue or home since its initial meetings at the Oxford Hotel. Further meetings were held at several other hotels: Markillie’s and Phair’s as well as Temple Court, the Caris Club and Scott’s Hall in the early days, and later the Amateur sports Club, The Victoria Racing Club, The Swiss Club and for the last ten years, most comfortably of all, the Kelvin Club. 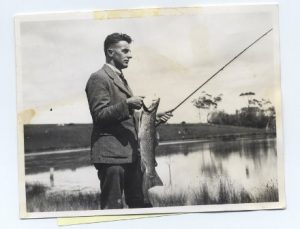 Communication to members was achieved via several media. Initially, a roneoed letter or circular provided notices of meetings. This was replaced by a periodical titled The Fisherman overseen by Barney Allen. Articles and letters by Secretary Les Vail were prolific and dealt with a wide range of issues, including those concerning access and the need for proper scientific study of the habitat.

This culminated in the appointment of Alfred Dunbavin Butcher M.Sc. as biologist to the then Fisheries and Game Department.

In 1955 the VFFA Newsletter came into being under the editorship of journalist and author Jack Pyke, who produced many humorous articles featuring his alter ego McTaggart.

The Newsletter has since become the lifeline of the Association for many members, particularly those more senior in years and country residents.

It has included many fine articles of practical and literary merit. For the VFFA’s 75th anniversary, a team headed by present editor John Philbrick, assistant editor John Pilkington and councilors Peter Boag and Rick Williams have selected this compilation.

Compiled in 2010, with thanks from VFFA members by R.A.Brothers.